Friday’s play at the $25,000 Mardy Fish Children’s Foundation Tennis Championships kicks off a noon with the last remaining round of 16 match, rained out from Thursday night, between Zimbabwe Davis Cupper Takanyi Garanganga against up-and-coming American Eliot Spizzirri of Greenwich, Connecticut. The singles quarterfinals as well as the continuation of doubles play also highlight Friday’s schedule that can be seen here: https://www.usta.com/content/dam/usta/pdfs/20190429_VeroBeach_M_OP.pdf 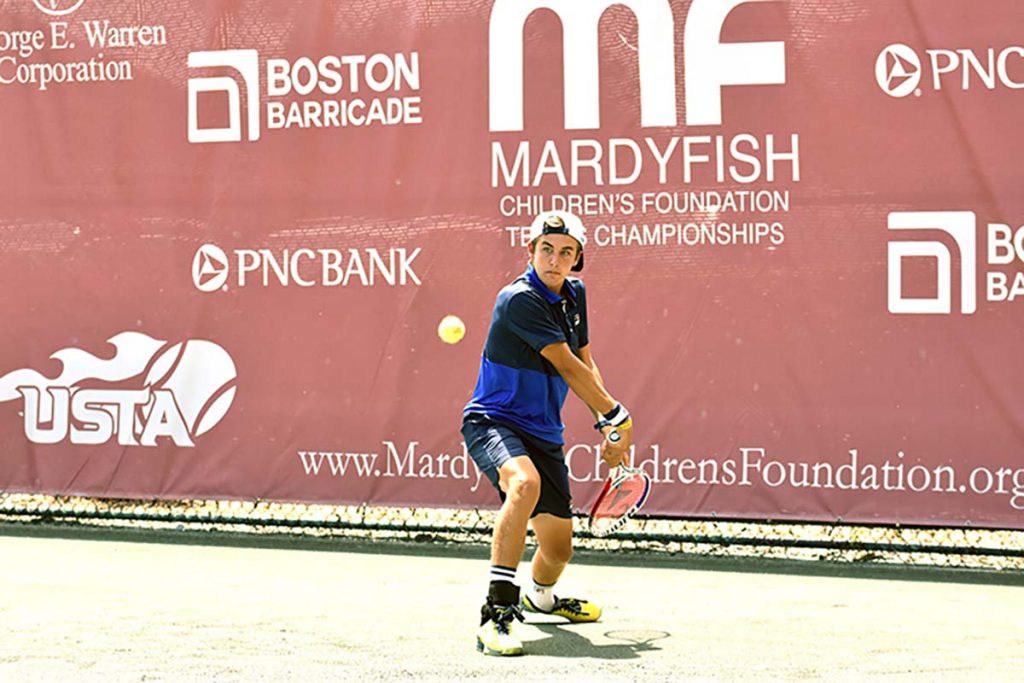 One player remaining in the singles draw that has a local connection is 6-foot-8 Paul Oosterbaan of Kalamazoo, Michigan. Vero Beach tennis fans have started to adopt Oosterbaan a bit as their own because he has been training at the nearby Grand Harbor tennis complex with head pro Marco Osorio, the former Davis Cup captain for Mexico who reached No. 268 in singles. Oosterbaan is being housed by tournament hosts, Tom and Sally Fish. Both his parents and grandparents are shopping for homes in Vero Beach.

For all of his 23 years, Oosterbaan has been encouraged and motivated by his 6-11 father, J.P. Oosterbaan, who proudly displays his NCAA National Championship ring, earned as a backup center for the University of Michigan 1989 basketball team where he played with NBA stalwarts such as Glen Rice, Rumeal Robinson and Terry Mills.

Then at 18, Oosterbaan, who grew from 5-11 to 6-6 after his high school sophomore season, won the USTA National Boys’ doubles title in his former hometown of Kalamazoo, Mich., which earned him a wild-card berth into the main draw of the U.S. Open. Oosterbaan and partner Ronnie Schneider lost in the first round to Brian Baker and Rajeev Ram, but that’s where he met 6-11 John Isner, currently the top-ranked American at No. 9 in the world.

“That was the craziest experience,’’ said Oosterbaan after defeating his doubles partner and friend Andrew Watson of Great Britain, 6-4, 6-3 Thursday at The Boulevard tennis club to reach the quarterfinals. “I stayed with John in Tampa for awhile before I found a place and he has helped me out.

“He told me I’m a big guy, too, and it takes some time and not to overthink stuff. Bigger players seem to mature and develop a little slower than others, so just stick with the process. John just turned 34 and is playing the best tennis of his life so there’s a lot of time left.’’

Oosterbaan, who’s ranked 682 on the ATP and No. 348 on the newly formed ITF World Tour rankings, is hoping to join 15 ATP pros who are 6-8 or taller, but the big dream is to join late-bloomers’ Isner and 6-8 Kevin Anderson into the Top 10.

“Big guys are starting to do well and like them, I have to be a big server and take the racket out of my opponent’s hands because in the long rallies I struggle, not being the fastest guy out there,’’ Oosterbaan said.

Oosterbaan, who reached the finals of a $25,000 ITF event in Calgary last year, will play fifth-seeded Nicolas Alvarez of Peru on Friday.

Also reaching the quarterfinals is top-seeded Pedro Sakamoto of Brazil, who took advantage of two consecutive volleying errors by his doubles partner, Dominican Jose Olivares, at 5-5 of the first set before prevailing 7-5, 6-2.

Bangoura’s ranking has dropped from 213th in 2016 to 400, but the 27-year-old Bradenton resident — an accomplished chess player – outmaneuvered Jamaican qualifier Rowland Phillips, 6-2, 6-3 in a rain-delayed match carried over from Wednesday.

Svajda, who also has been mentored by Isner while hitting with him for five months in Dallas, completed his rain-delayed first-round match from Wednesday with a 6-1, 7-6 (3) victory over 26-year-old Romanian Dragos Constantin Ignat.

“I can’t really return John’s serve yet, so we did a lot of ground-stroke work,’’ said Svajda, who’s just 5-8 but possesses smooth, powerful ground strokes from both sides.

Svajda reached the pre-qualifying finals at the Indian Wells Masters 1000 in March, and thanks to Isner, practiced with the legendary Roger Federer for four consecutive days.

“Like John, Roger told me to play my game, that it’s a long journey and to stay positive,’’ Svajda said.

“He’s got great timing and feel,’’ Goldfine said. “He can generate easy power and defends very well. The next step for him is to take some chances and close out points at the net to make things easier on him. He’s got a great attitude and a lot of potential, but he needs to play more junior matches. It’s too hard now to skip levels.’’

In other matches, unseeded defending champion Juan Benitez of Colombia was sent into retirement 6-2, 7-5 by eighth-seeded Dmitry Popko, a native of Russia who plays for Kazakhstan, but trains in Boca Raton with coach Ilya Drozdov.

“That’s it, I’m done,’’ said Benitez, 23, who’s returning to Baylor University to pursue a career in communications. “It was [fun] at the time but my career could’ve been more; I was a bit unlucky. [Popko] just gets balls back and is solid.’’

Popko has gotten used to winning as he’s after his seventh ITF World Tour title this year. He was ranked 12th in the new ITF ranking system and will most likely break into the Top 10 if gets past his quarterfinal opponent, top-seeded Pedro Sakamoto of Brazil, who he defeated 6-2, 6-1 in a second-round match of an ITF Futures $15,000 event in Turkey in February 2017.

Once ranked 178th in 2017, a shoulder injury and a coaching change saw him drop to 608 and relegated Popko from the Challenger Tour to the lower ITF minor league. He won three ITF tournaments in Turkey, as well as one in Naples, Sunrise and recently Orange Park.

Back with his boyhood coach Drozdov, believes all the winning breeds confidence and helped him pull out his late-afternoon match before the rains postponed the rest of the evening matches.

“That was a high-quality match,’’ said Popko, who plays for Kazakhstan but trains in Boca Raton. “I had to step up in the third set and I did. I have confidence and it also helped.’’

Mejia, who had an outstanding junior career, said he lost his concentration briefly in the third set, and it cost him.

“He’s one of the toughest players in the Futures; he’s won like 65 matches this year,’’ Mejia said. “I thought a little focus in the game I was broken at 3-2 him in the third set. I’m getting better and have to keep grinding. These are the kind of matches you live for and the type I have to win in order to get to the next level.’’

Nice to see this from the Australian Open on ESPN

Yes....Ben Shelton has a big serve....he obliterated our sponsor signage with it at our @VeroFutures when he played our $15,000 Futures event in October of 2021. We had him sign the "fragments" and gave them to Bob Gibb of John's Island Real Estate

I confront Ben Shelton in his post-match on-court interview at the $15,000 @VeroFutures in October of 2021 about the property he destroyed.... 🤣 https://youtu.be/oonrh9t4osQ via @YouTube

Looking Back At A Hallmark Event In The Career of Tommy Paul - His First ATP Point (Achieved In Vero Beach, Florida In 2014) https://www.worldtennismagazine.com/archives/21667 via @WorldTennisMag